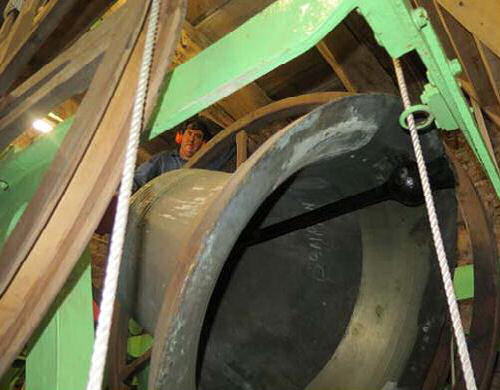 I have prepared a photo essay showing the Replacement of Tenor Clapper at Bampton, that can be downloaded in PDF format HERE.

Congratulations to all the peal ringers that have taken part in the "Great Western Castle Class Locomotives Peal Project", which was 100 peals rung to commemorate, as the name suggests, the GWR Castle Class of locomotives.

Most of the peals have been rung at Huntsham, however on 29th September 2018 the 100th peal, "5057 Earl Waldegrave Surprise Major", was rung at St Mary Magdalene church, Chewton Mendip. The Waldegrave family seat is Chewton House, near Chewton Mendip.

The 100th "Castle" peal band are detailed below:

This now completes the Great Western Castle Class Series with all locomotives from 5000 Launceston Castle to 5099 Compton Castle having been rung to the length of the engine number . The ringers of 3, 6 ,7 and 8 have personally completed the series.

The band would like to associate the peal with the late John Cornelius of Shepton Beauchamp whose article in the ringing world “Railway Reveries” was part of the inspiration to undertake this series. 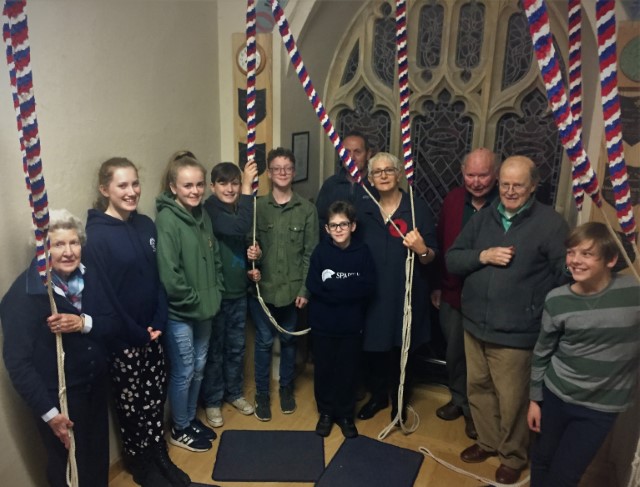 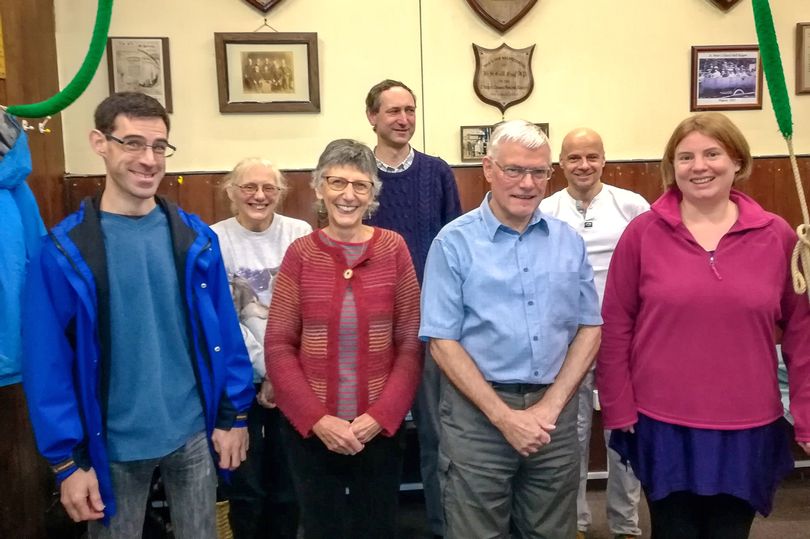 Bells have rung out over Tiverton in celebration of the 150 anniversary of bellringing in the town.

Although bells had been rung at St. Peter’s since Tudor times, by the mid-19 century the existing ring of eight bells had fallen into disrepair and one bell was badly cracked. Under the leadership of Col. Charles Troyte of Huntsham Court a new group of ringers, the St Peter’s Society of Change Ringers, was formed in November 1867 to put the bells into good order and to ring regularly for services.

After a year of restoration work an “Inauguration Festival” of ringing was held in November 1868. This culminated in a peal rung by the St Stephens Ringers from Bristol which consisted of 5040 changes of Grandsire Triples, taking nearly three hours of continuous performance.

To mark the 150 anniversary of that first “scientific” peal at St Peter’s and the end of the 150 year of the Society, a band consisting of four resident members and four invited ringers met at St Peter’s on Saturday November 24 to ring a similar peal of Grandsire Triples.

Les Boyce, a member of the Tiverton bellringers said: “5040 is the maximum number of different changes which can be rung on seven changing bells without any repetition. Ringing without a break and following the method’s pattern from memory, this was a significant challenge for several members of the band.

“However, the piece was performed with good striking throughout and completed in 3 hours and 22 minutes – a remarkable feat of mental and physical endurance.”

On Thursday, 17 January 2019, with a peal of Yorkshire Surprise Major, rung at Huntsham, Devon, Mike Hatchett achieved his 2000th peal, sixty-six years plus after his first. Although he has lived in Devon in this millennium, he was formerly a resident member of the Oxford Diocesan Guild, with whom he rang his early peals. His first peal was rung at Horton, Bucks in August 1952. Mike rang his 1000th peal in June 2008 at Wonston, Hants.

Certificates for our RINGING REMEMBERS Recruits Here is Nano receiving his Level 2 Learning the Ropes Certificate. Nano has been ringing for 1 year and is making great strides. He is a helper at the Bampton after school Bell Club and comes to practice nights at both Huntsham and Bampton. Now he has his Level 2 he says he will come to more Sunday Service ringing and will soon be ringing at his first wedding. I am extra proud as he is my first Learner. Well done Nano! Our Troyte Ringing Centre adult learners have achieved Level 1 Learning the Ropes. Bridget and Steve have been having lessons on the Bampton Practice bell with Mike and Pat Hatchett and they regularly come to Thursday practice nights at Bampton. Last week we all enjoyed some call changes at backstroke. Well done Steve and Bridget!

For every bear that ever there was
Will gather there for certain
Because today’s the day the
Teddy Bears have their big jump!

It seemed like the whole of Bampton turned out in force to make sure the Teddy Bear parachuting was a great success this year. In time honoured tradition Garfield was the first bear to have a go followed by all the other brave bears of Bampton including a crocodile, an Elsa doll, Paddington bear, a fluffy bat and a vintage bear (don’t think it was a Steiff!) Each bear was awarded a Certificate of Bravery and went home triumphant. Cream teas were available in the church and despite busy bakers having made 8 dozen scones the cream teas sold out. There was also a quiz with questions about the Church. The weather was kind to us and we enjoyed the sunshine. The event raised Ł298.53. This will form part of the Troyte Ringing Centre donation to the Bampton Church Fabric Fund. But perhaps more importantly, a lot of fun was had by all. 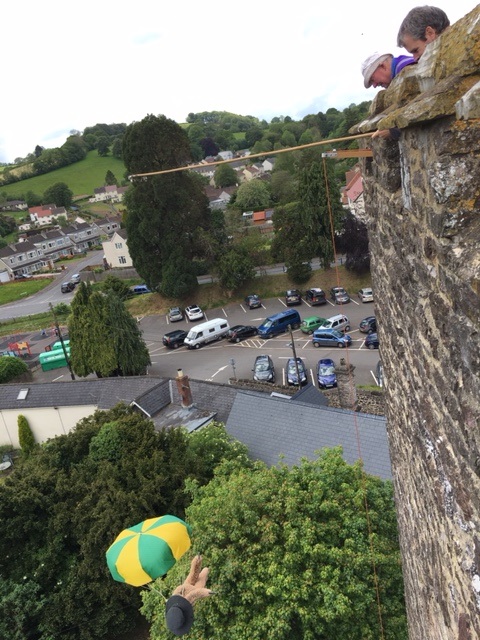 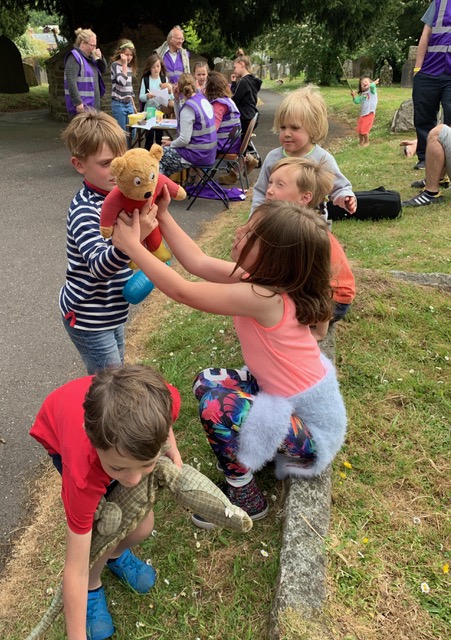 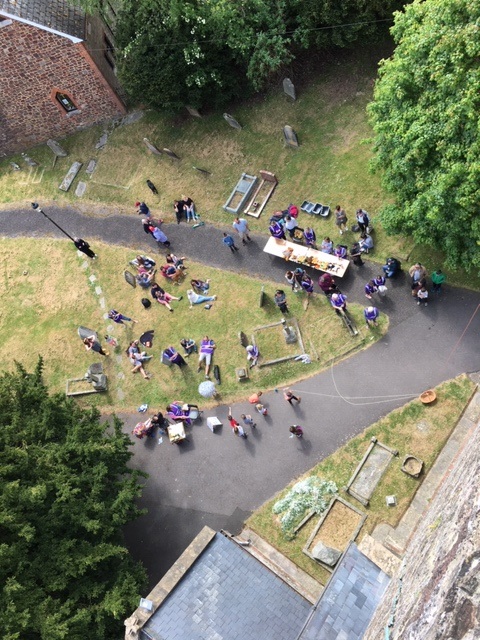 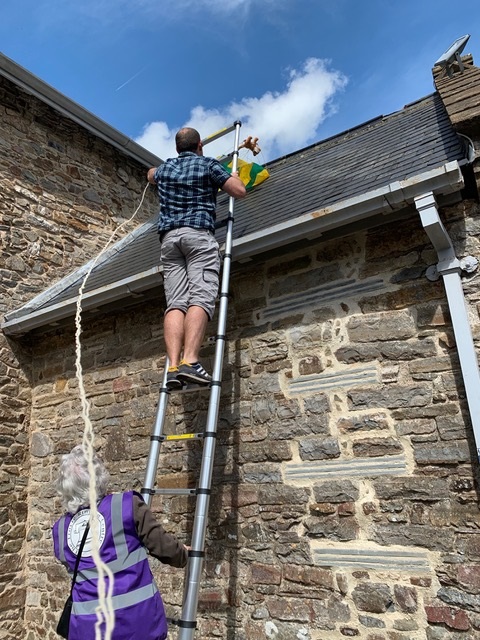 View from above and one Ted got stuck on the roof. Here is the rescue operation captured on camera. 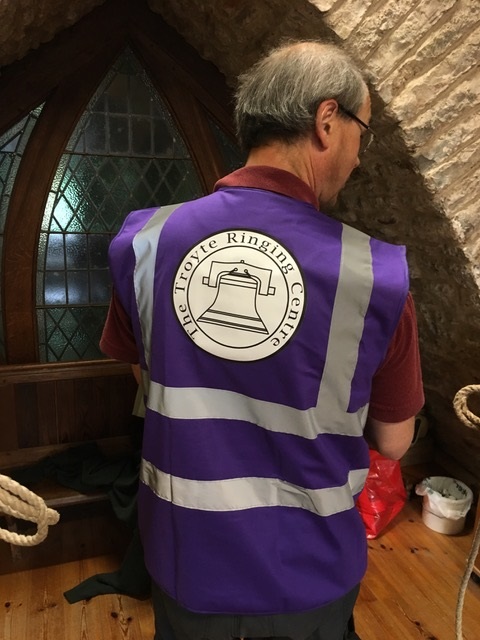 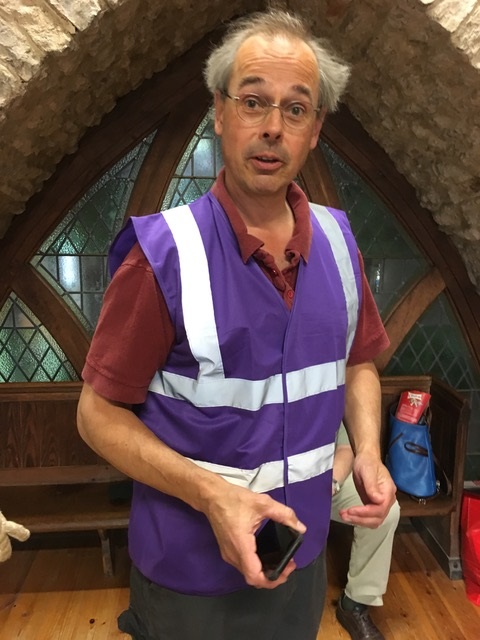 We were all wearing our new Troyte Ringing Centre Hi Viz jackets.
Here is Mike Ward our Bampton Steeplekeeper modelling the jacket.