Thursday 30th October 2008 saw the 750th Bampton Charter Fair Celebrations at St. Michael and All Angels Church when the Bampton Bellringers and other local ringers attempted not just one but two complete peals. That's an amazing 10,000+ changes across 6 hours. Each peal was to involve around 3 hours of continuous ringing - the one in the morning was successful (details below), but unfortunately one in the afternoon was lost after one-and-a-half hours.

Video cameras were fitted to both the ringing chamber and bell chamber so the public could watch this amazing feat live and also take a look at a display of bellringing material in the church.

There was another successful peal rung on the same day at Huntsham, All Saints to celebrate the Charter Fair:

A joint event with colleagues “across the border” has become an annual fixture in the calendar. This year it was N.E. Branch’s turn to host the joint meeting with the Dunster Branch of the Bath and Wells Association. On Saturday 16th August, hampered with several weddings to ring for, a small group started the ringing at Huntsham mid-afternoon, then made their way to join the Bampton band and other members of the Branch to ring and have tea provided by the local ringers at Bampton. The evening was rounded off by a general knowledge quiz compiled by Quiz-Master, Mike Hatchett. With three teams taking part in a wide ranging and demanding test of local knowledge, food, childhood memories and world-wide questions, one of the Dunster teams won the competition, their reward being coasters from the Troyte Ringing Centre.

Lucky with the weather this year, after cancellation of the show in 2007, NE Branch made their presence heard in the Churches tent. With the first of the new display boards giving detailed information on the casting and structure of a bell, along with details of local towers we maintained interest most of the day. During quiet spells we were able to attract attention by ringing the model bell, loaned from St Petrock’s, with many people ‘having a go’. Not only was the event an opportunity to recruit, hopefully, a few more interested people for the Branch, but more importantly, a very successful Public Relations exercise. My thanks go to all who helped ‘man’ the stall during the day, not only answering sometimes technical questions but also showing their enthusiasm which will hopefully encourage others to begin the learn to ring too.

SNIPPETS FROM THE PAST
– GLEANED FROM THE GUILD LIBRARY

From the St Sidwell’s Society of Ringers Minute Book

Several contentious issues arose in 1883 and this led to the calling of six extraordinary general meetings during the year in addition to the Annual Meeting held at Easter. Most meetings were held in the Belfry at St Sidwell’s, but the Society had a room (called the Institute) at 160 St Sidwell Street which it rented, although this was becoming a financial burden to the Society.

A summer “Wayzgoose” is proposed and members taking part in the outing will be asked to pay a sum each week.

After months of discussion with the Rector and Churchwardens a sum of £3 a year is accepted in payment for chiming on Sundays. Immediately a rule is proposed that “chiming members” should be fined 6d for absence or 3d for lateness at each service. [A significant number of the St Sidwell’s minutes refer to opportunities for fining members for various misdemeanours!]

In April it was decided to dispose of the Institute room and sell off the Bagatelle Board in which several members had a share. Several meetings are held about this and the board subsequently raised £8.0.0.!

A proposal to erect a peal board recording the “first peal ever rung by a band composed of entirely Exeter men” at St Sidwell’s in May 1881 was delayed while enquiries were made as to whether it was a true peal. A lengthy letter was received from the conductor, W.C. Marsh. This [quoting from the minutes] “may be briefly summed up as follows that the peal of Taylor’s 5040 Grandsire Triples was a true and correct one, not a bob or single more or less than there ought to have been and in its proper place. And he also informed the society that he would not take upon himself the paltry honour of conducting a peal that was false. He also mentioned that it was not his desire to have a peal board put up.” On the basis of this letter the members, who had also largely comprised the peal band, voted to go ahead with the board.

From the first Guild Peal Book

1908 started with the 200th peal being rung for the Guild, this being Grandsire Triples at Emmanuel, Plymouth, conducted by Harry Myers. Of the 22 peals rung in the year 15 were of Grandsire Triples, four of Grandsire Caters and the remaining three were of Bob Major. More notable peals rung in the year included the first of Triples on the Stafford Eight at the Cathedral by members of the Exeter Cycling Club in 3 hours and 53 minutes, the first of Grandsire Caters on St. Andrew’s, Plymouth and the first peal by a lady member of the Guild, Miss R. Elliot, who rang the third to Grandsire at St. Peter’s Tiverton in May.

On Monday, 16 June, with a peal in fifteen Minor methods at Wonston, Hants, Mike Hatchett achieved his 1,000th peal, fifty-four years and ten months after his first. It hadn't taken him quite as long as Len Stilwell's seventy years and two hundred and thirty-four days between first and one thousand, but still a "respectable" time compared with modern trends! Although he has lived in Devon in this millennium, he was formerly a resident member of the Oxford Diocesan Guild, with whom he rang his early peals.

Bill Butler also conducted his first peal - which was in eight Minor methods - at Horton, Bucks, and, comparing the two peals, I notice that just by chance, no method from the first was repeated in the one thousandth! I'm sure all his many friends will congratulate him on this achievement, and wish him every success in the future. 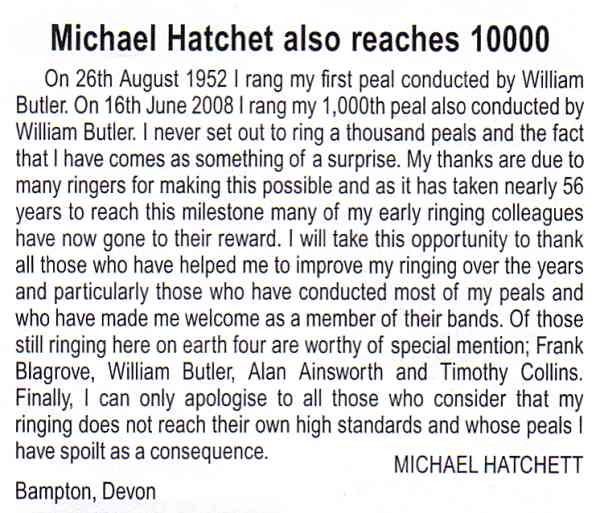 The headline mis-print makes it eye-catching don't you think?

Reproduced from THE RINGING WORLD

These ’90 minute mini-seminars’ were suggested by Peter Pay as an alternative to some of the NE Branch practises which were becoming less well attended.

The seminars are being held in various locations throughout the Branch on a variety of topics. The fees are £2 inclusive.  Posters are distributed beforehand with further details.

They started on Saturday 26th January, under the title ‘Just beyond Bob Doubles’, which was attended by 6 members of the Branch.

Following this, on 23rd February, we had a hands-on rope-splicing seminar in Tiverton, ably led by Lynda Smith and attended by 12 members.  It was a very enjoyable session in which we learned the difference between a fid and a marlin spike, and how ‘right over left and under’ didn’t work the other way around. It was the birthday of Bill Rosewell (Uffculme) who said it was a super way to celebrate.

There are 4 further seminars planned throughout the year. The next is on Saturday 29th March 11.00-12.30 entitled Health and Safety in the Tower, to be run by James Clarke, at Hemyock.

Anyone interested in attending is asked to book through Pat Hatchett (01398 331843) or to contact an Officer of the Branch.

A collection of brand-marked items are for sale to support the Troyte Ringing Centre. Anybody interested in the souvenir goods then look out for them at training or social events or if your really keen then e-mail Sheila Scofield on sheilascofield@hotmail.com.

The Ringing Round Devon quarterly Newsletter of the Guild of Devonshire Ringers can be found here.